I hit the road and drove out of Vegas and was impressed with the condition of the interstate highways. In the southwestern US, the highways are in great shape and the speed limits are reasonable; 65mph in the city and 70-75mph outside of the cities. Some western states like Idaho and Utah take it to another level; like 80-85mph!


Before I left town I checked lodging availability for the area but surprisingly there was very little. I guess I'm not the only one who likes hot weather. A few friends recommended I check out the Amargosa Hotel in Death Valley Junction, and luckily I managed to get the very last room available.

The hotel was designed by architect Alexander Hamilton McCullough and built by the Pacific Coast Borax Company from 1923-1925. Its design is based on Spanish colonial Revival, and has 23 rooms, a dining room, lobby, dormitory for employees, and a theater. In 1967, New York City dancer and painter Marta Becket and her husband were driving through the town on the way to an engagement when they had a flat tire. She fell in love with the town immediately, told (paraphrasing) her husband "fuck this shit" and moved to Death Valley Junction.

Back in the day when the town was founded, only several hundred people lived there. That was considered "booming", for a town based on the business of borax mining. Anyway, Marta Becket moved to Death Valley Junction, rented the performance hall, did some painting and spruce up work and settled. Until her death in 2017 at the age of 92, she performed regularly as a ballet dancer who was known for her murals and paintings. Ironically, I had first heard about her during one of my random YouTube video streaks last year, so I was pretty stoked when I realized the room I rented was that same hotel. Check out the YouTube trailer below. Coincidentally, I hate opera music and am not a fan of ballet. Ironic is that I have a friend who used to dance in the Pacific Northwest Ballet and likes death metal, punk rock, and rides motorcycles. Probably likes Eve 6 too. 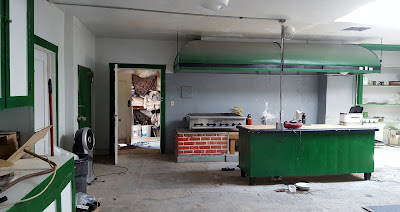 The hotel is not luxurious at all; it needs work. The place is on the national registry of historic places, but the community is small and poor, and it not flush with money. It does however have character. No flat screens, 1920s era door locks on exterior doors, and it encourages you to meet other guests. I met plenty of rad people; friendly and outgoing. They offer tours of the opera house and theater, and I was going to check it out but ended up being too busy driving around exploring and taking photos.

After I checked in, I got in my rental car and headed to Death Valley National Park. A couple of things here; you see signs frequently that say "No Services Next 70 Miles" (or 50 miles, etc). That means gas, water, food. I had to drive 8 miles out of the way to fill up the rental car with fuel, get more water and some food. I then drove back to the park and the temp started rising as I descended from 3000 feet to below sea level. Eventually it topped off at 124° F. 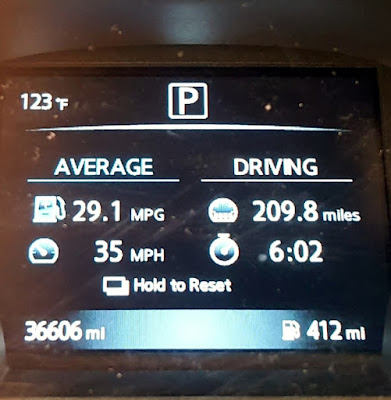 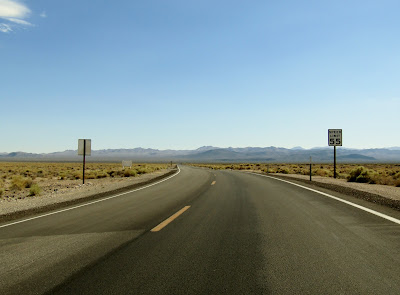 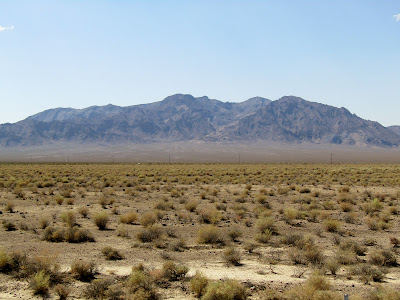 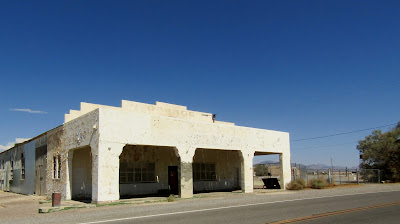 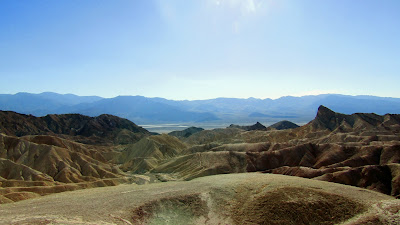 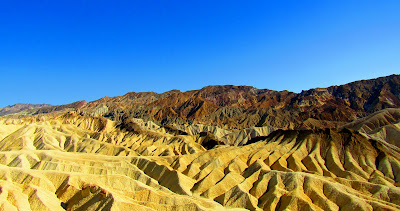 I was headed to Badwater Basin, which is the lowest point in North America at 282 feet below sea level. Badwater has the largest protected salt flats in the world at over 200 square miles. They are produced when Death Valley's drainage system seeps out of the fault line boundaries to the surface along with minerals such as borax, calcite, and sodium chloride (table salt). The salt flats are 3"-60" deep at Badwater, but salt flats are everywhere at Death Valley. Traversing the salt flats is hazardous due to the thin salt crust covering the searing hot mud below. 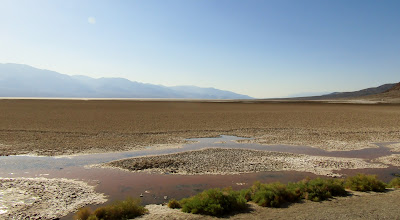 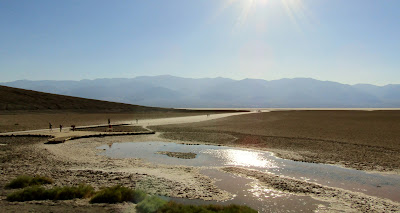 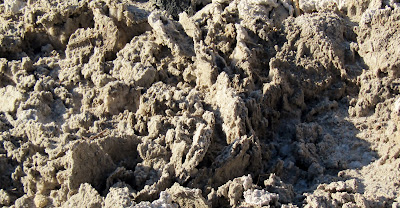 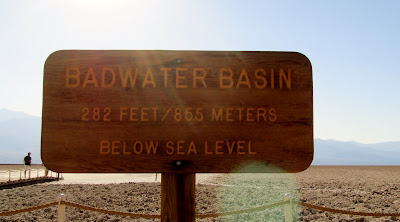 Every year, an ultra-marathon race occurs here in July. Its called the Badwater ultra-marathon and you have to be invited by at least finishing a 50k marathon. It starts at Badwater Basin, stretches for 138 miles and finishes at the Mt Whitney portal at 8360 feet. Dean Karnazes is a guy from San Francisco who has ran it several times and won a few; I've met him once before at a book signing on Capitol Hill in 2004 when he published his book Ultramarathon Man: Confessions of an all night runner.

Dean is a machine; running 350 miles nonstop, and 50 marathons in 50 days in 50 states is just another day at the beach for himLocal Seattle resident Scott Jurek has run it too. The temp is frequently above 125° during the race, and the asphalt gets so hot the runners have to run along the white road stripe near the shoulder. There's no multi-thousand dollar prize like Boston for winning; finishers get a belt buckle 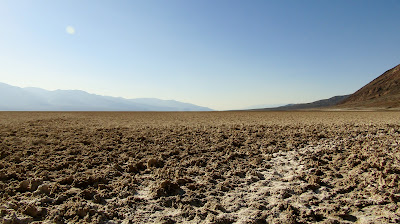 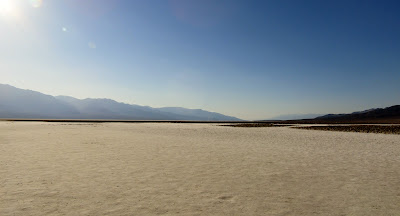 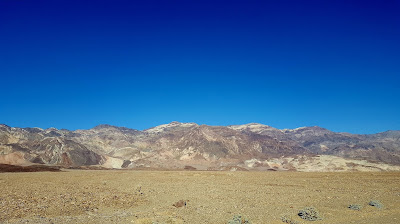 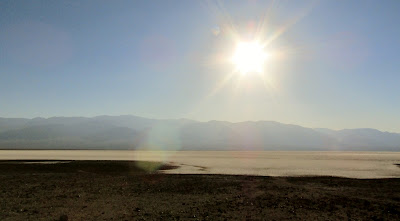 After leaving Badwater, I headed north for Stovepipe Wells. No plan or itinerary, just photos of sunset and wanted to head north. I stopped at drove through Artist's Palette along the way and it's definitely something to see during the golden hour when the shadows start getting longer. 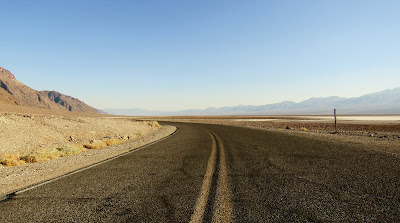 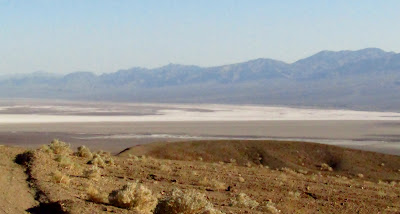 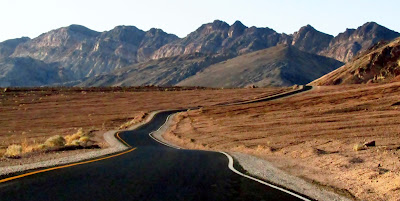 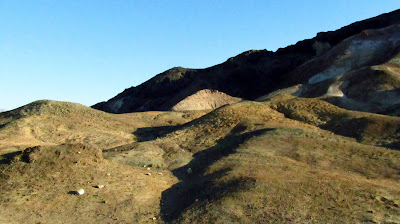 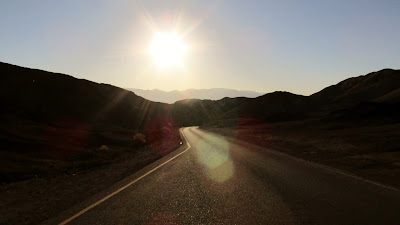 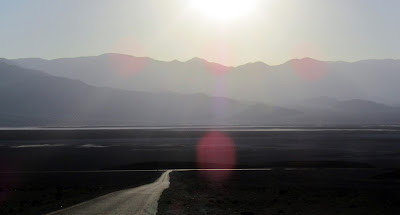 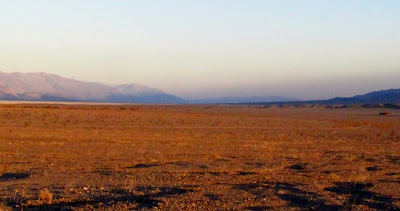 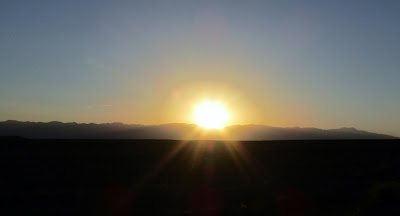 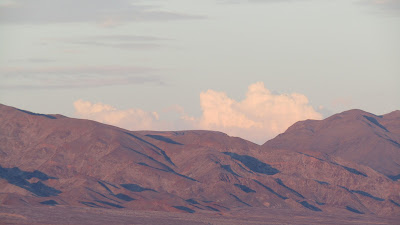 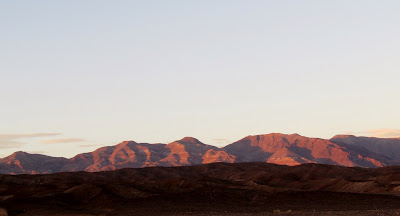 I spent some time Sunday morning and afternoon looking for antique glass insulators from the telegraph poles leftover from another era. These may have been installed at the turn of the 20th century, although my guess is more like the 1920s. Some of them still have telegraph wire strung from the insulators. Many of the poles had been knocked over by other looters trying to salvage the insulators, unfortunately there weren't any on the ground to salvage. I've always been fascinated with stuff like this, and have an appreciation for history such as this. 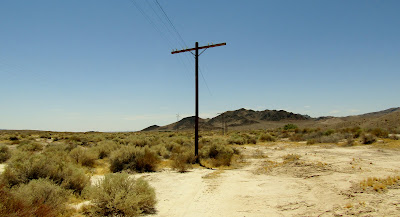 Next time I'll do more research before buying a  camera for taking good night photos on a trip. My Samsung S6 Active takes incredible photos but its not ideal for night shots and you cant put a tripod on it. I got a Canon SX420 (not a DSLR), and I will review that here. Not a single one of the night photos came out, even with a tripod, using the highest ISO speed (1600), and a 15 second shutter delay. The battery life sucks, and I couldn't see anything on the LCD so I was taking photos blindly. Even the daytime photos sucked, and I ended up just going back to my Samsung S6.

Arrived at the airport early, scored a cheap first glass upgrade to first class for $50 and called it a weekend. Before I left for my trip, I posted on Facebook about it and half the responses were positive and envious, while the other half suggested I was crazy and its too hot. I like what I like because I'm able to find something beautiful in it. I'm a cynic when I want to be, and can wander into the desert and be amazed by how bright it is and how vast the sky is. If you stayed in a 5 star hotel every time you traveled, you would only set yourself up for failure the next time you had no place to stay and checked into a Motel 6.

Death Valley was everything I had expected and hoped for. I wish I had more time to drive from top to bottom and explore more, and I didn't leave back to Seattle feeling like I missed anything, except for nighttime sky photos.
Posted by Sadtaco at 22:01